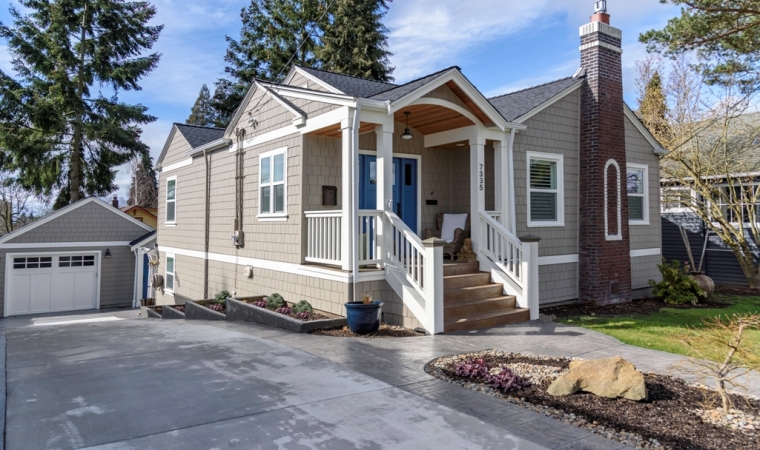 Adding the Charm Back into the Craftsman

This Seattle homeowner purchased her 1926 two bedroom, two bath home based on neighborhood preference. While budget was a consideration, it was most important to her to end up with a design that was personalized, functional and fit her lifestyle. After receiving a referral to us from a friend, she called us to discuss a garage remodel, since it was small, old, and needed significant repair. After discussing the garage remodel, the conversation continued to the other items on her wish list: the house had a tiny, cramped 90-degree angled entry, inexpensive siding, and lacked a true master suite. The stairs to the basement were steep, poorly placed and took up valuable room in the kitchen. Her laundry space could only accommodate European stackable models; not side-by-side models that she desired. The previous owners, house-flippers, had taken the original attached chicken coop and insulated it to create a small room behind the kitchen that served as a sitting room and walk-through to a poorly designed deck, neither of which were to her liking.

Sales Manager Mark Jensen helped her create a new design that featured a rebuilt one-car garage that provides additional storage space. A 320-square foot home addition increased the size of the second bedroom, allowing us to apply more space to the master bedroom in the form of a walk-in closet and master bathroom.  The addition also removed the awkward chicken-coop-turned-sitting-room and allowed for the stair relocation to the new area. A new basement exterior entry door improved entrance to the home from the garage and tied into the newly moved staircase to the upstairs, improving the basement living room flow and access to the main floor. The repurposed stair space was transitioned into a much-needed kitchen pantry on the main floor, while in the basement, a newly created laundry room now features a full-size washer and dryer, cabinetry, and a wash basin. Shingle siding replaced the worn and dated version, and a larger front entry and new roof helps the home meld perfectly in the neighborhood.

While removing the chicken coop and digging the foundation for the addition, we found an abandoned oil tank that could have caused significant construction delays and added cost. The previous owners had not decommissioned the tank properly, instead just cut the lines and left it. Once found, we had it evaluated, found no soil-contamination, and had it removed and properly disposed of. Due to the home’s age, lead and asbestos abatement practices were honored throughout, and framing and electrical component improvements were made as necessary. Since hardwoods were being added to the entire main floor, but the kitchen remained, we had to be very conscious about dust, stain, and other challenges with working around existing cabinetry. The resulting renovation left the homeowner with beautiful 1920s features, contained modern conveniences and met her the lifestyle needs.